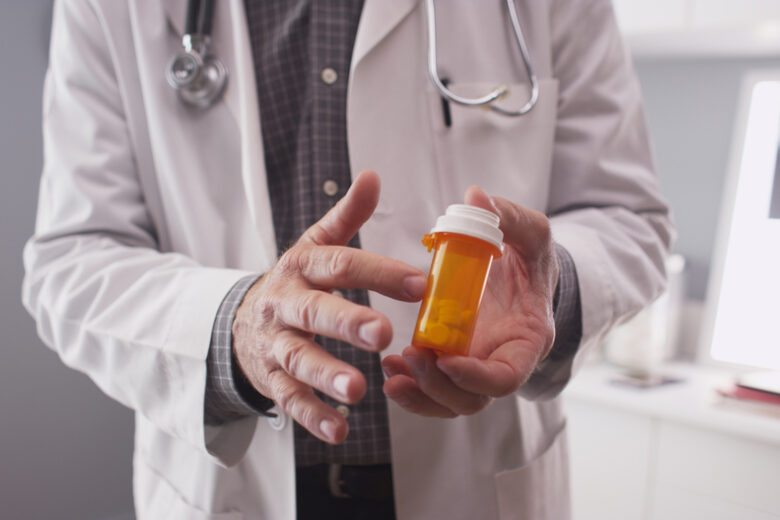 Fractures of the upper end of the arm at the shoulder are typically painful. In fact, Jane’s fracture was particularly bad and so predictably very painful. Her proximal humerus was broken into three large pieces. Two of the pieces remained attached to tendons and as a result were pulled away from one another as well as from the third larger fragment. Her injury occurred following a fall from a ladder and so by the time I had first seen her, her shoulder was significantly swollen, black and blue and deformed. All fairly typical for these types of injuries.

That was four months ago. Since then, she had surgery in which I pieced the bones together and held them in place with screws and a metal plate. She had been in physical therapy and her range of motion and function seemed to be coming along.

Orthopaedic surgery can be particularly painful. Fracture surgery worse… and fracture surgery of the shoulder even more so. Initially after her surgery, Jane was given a narcotic pain medication. Due to the pain typically experienced after such procedures, this is routine. Usually, I’ll slowly taper the medications down to lower dosages and lesser strength narcotics over several weeks to months.

But now it was four months from surgery and Jane was once again requesting a refill of the same medication at the same dose that I had initially prescribed. She was crying as she told me how terrible her pain was. She couldn’t sleep or do her necessary physical therapy. And…she “needed” more medication.

Odd because her incision was well-healed. There was no excessive swelling, redness or increased warmth – No sign of infection. We had reviewed her X-rays and her fracture had healed in the proper position. The implants were where they were supposed to be as well. Nothing seemed unusual…with her shoulder that is…but I was still very concerned – Why?

See, there is a painkiller overuse epidemic in the US and a leading cause of this is doctor prescribed opioids (orthopedists trail only primary care doctors and internists in the number of opioid (narcotics) prescriptions written). Highest risk group – middle aged women. The stats are incredible – 80% of the worlds opioids, 99% of the worlds hydrocodone (Vicodin) and 81% of the worlds oxycodone (Percocet) are prescribed in the US alone. Nearly 10% of the US population aged 12 and older use these medications illicitly.

This can lead to big problems. One in 15 people who take prescription painkillers for nonmedical purposes will try heroin within 10 years. Opioids are responsible for more deaths per year than motor vehicle accidents and suicides combined. And all of this has increased significantly over the last 25 years.

These medications, since prescribed by physicians, are often felt by patients to be safe, but more people die each year from opioid overdose than from heroin and cocaine combined. Most of these deaths occur within the prescribing limits recommended by medical experts. Add these stats to the personal, family and social consequences of addiction and it is easy to see a very serious problem.

Fact: Orthopaedic problems and the surgeries used to fix them are painful. The recoveries are often lengthy. Nothing can completely eliminate all pain over an extended period and remain completely safe.

The problem is that when patients are in pain, they’re not thinking about the consequences of overusing these medications…That’s their physician’s job. Unfortunately, neither of them often realize the problem…that is, until it’s too late.

Jane surely hadn’t. When I began talking to her about my concerns, she became upset rather than enlightened. That is often the case…and the challenge. Making patients aware of the potential problem without offending them, angering them, having them go elsewhere for their care…and their prescriptions…is not always easy…In fact, it is not often even possible.

But it’s my job and I take the responsibility seriously. As should my colleagues. My goal as an orthopaedic surgeon is to get my patient better, not just heal their injured part. I strive to return them to the activities that they enjoy…hopefully to the way they were before their musculoskeletal issue began. If I fix their shoulder, but leave them dependent on prescription narcotics, I haven’t done my job…I haven’t helped them at all. I’ve actually left them far worse than when I met them.

It is much easier for me to write a prescription than to speak with my patient and try to explain the dangers of these medications. It is definitely quicker and usually makes for a happier patient (and often better reviews on Yelp 🙂 ). So it is no wonder that many physicians choose to take the path of least resistance…but that doesn’t make it right.

Hopefully Jane will come to understand this.

Physical Therapists: When Do You Need Them?